Stephanie Grimes Cornman coveted the designer wedding dress she had ogled in fashion spreads. But the price kept it out of reach — that is, until she embraced the idea that a dress, unlike a spouse, is not to have and to hold forever.

Ms. Cornman rented her gown, making it the “something borrowed” she wore down the aisle for her December wedding.

She rented a Jenny Packham silk sheath with elaborate beadwork from a website called Borrowing Magnolia for $1,800, or 30 percent of the $6,000 for which it typically sells. The site is one of several businesses that rent wedding gowns, facilitating the practical one-time wearing of an ornate dress and making high-cost fashions accessible to women unable or unwilling to pay full price. 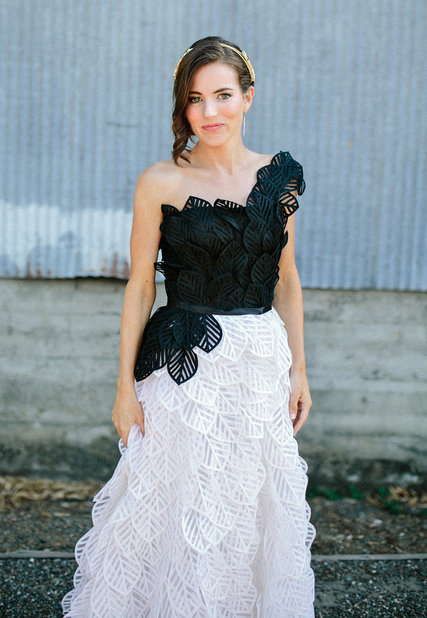 Ms. Cornman, a funeral director from Oklahoma City, searched the approximately 400 dresses listed on Borrowing Magnolia’s site, brands that include Monique Lhuillier, Nicole Miller and Vera Wang. For 14-day rentals, the dresses cost from $375 to $2,000, up to 85 percent off their retail prices.

(Don’t be late returning them, though. For each day a dress is late, the renter pays 110 percent of the daily rental rate; in Ms. Cornman’s case, that would have been $141.)

For $99, she had three dresses mailed to her home; once she decided on the Jenny Packham, that $99 went toward the cost of the rental. The site hemmed the dress for her, per measurements she sent in.

Ms. Cornman said that renting the designer gown helped make it possible for her to afford it.

“My husband had called a magazine to find out who made this dress I’d fallen in love with, but then we found out how expensive it was,” she said. “I was so glad to get it for a reasonable price, and I don’t know what I would’ve done with it again, anyway.”

To ensure that gowns like the one Ms. Cornman wore are in good condition, Borrowing Magnolia limits each dress to three rentals annually and five total, according to Ashley Steele, a founder. Sizes range from 0 to 24; alterations are permitted but must be reversible.

Some brick-and-mortar bridal boutiques have similar policies. Among them, Get the Gown, with locations in Houston and Miami, and One Night Affair in Los Angeles cater to women seeking to borrow.

“Men have been able to rent a tux, from Armani to Versace, for years,” said Jessica Berriman, a founder of Get the Gown, which opened last September and rents out, for an average $1,000 a week, dresses that typically cost $5,000 to $13,000. Among the labels on offer are Carolina Herrera, Oscar de la Renta and Vera Wang. Late returns cost $50 a day.

Her customers “don’t want to buy beach wedding dress they’re going to wear once,” Ms. Berriman said. “But they’re still very particular about what they want.”

With such discerning tastes driving them, some rentals may not sound like stand-alone bargains. But several shops emphasized that they catered just as much to trend-consciousness as practicality.

One Night Affair carries a mix of bridal fashions, from unlabeled samples to Badgley Mischka and Galia Lahav gowns. The dresses cost from $100 to $1,000 for five days, plus in-house tailoring costs. The shop also rents out custom-made dresses, starting at $299.

Sharon Gilchrist opened the store 29 years ago and ran it with her husband, Geoff Gates, until they sold it last fall. It continues to operate under the same name in the Culver City neighborhood of Los Angeles.

“Renting wedding gowns was put down back in 1986,” Ms. Gilchrist said. “People didn’t want to rent, but that’s changed now.”

She attributed increased interest to the downturn in the economy and, even more, to the Internet, for widely showcasing the latest fashions and easily connecting owners and renters.

Email ThisBlogThis!Share to TwitterShare to FacebookShare to Pinterest
Labels: Gowns