Sony’s ‘The Wedding Ringer,’ With Kevin Hart, Has a Tortuous Path

With its flickering New York skyline, the nearly extinct Miramax Films logo will appear again in theaters next month on “The Wedding Ringer” — a comedy that actually belongs to Screen Gems, the ambitious genre films unit of Sony Pictures Entertainment.

And therein lies a story.

It is the kind of tale that movie producers like to tell over chopped salad and iced tea on the balcony of Soho House, a members-only hangout on the edge of the Sunset Strip. But unlike most of Hollywood’s insider yarns, this one ends on a high note. That is because “The Wedding Ringer,” which seemed to die with the collapse of production at Miramax in 2009, is set for release Jan. 16, in time for the film-friendly Rev. Martin Luther King Jr. holiday weekend, with Kevin Hart and Josh Gad in lead roles.

The movie is produced by Will Packer and Adam Fields. Mr. Packer has often worked with Mr. Hart. But it is Mr. Fields who managed to wring a broad Sony comedy — think “Wedding Crashers” meets “Bridesmaids,” if Kristen Wiig and pals were guys — from a script that was buried in a New Jersey warehouse with 18,000 boxes of paperwork that accompanied Miramax when Walt Disney sold it to a consortium of financiers in 2010.

Actually, that was only a little over half the paper accumulated by Harvey and Bob Weinstein when they ran Miramax, first as an independent company, then as a unit of Disney, before leaving to found their Weinstein Company in 2005.

Trim, intense and 50-something, Mr. Fields has been involved with movies at least since the 1980s, when he was credited as a music supervisor on “Endless Love.”

He has an eye for opportunity and considerable wit.

Mr. Fields once sold Fox a cannibalism thriller, “Ravenous,” by convincing the studio chief, a vegetarian, that it would turn people off meat. Asked about the recent death of his father, a Madison Avenue executive of the “Mad Men” era, Mr. Fields said the ashes were being stored in a favorite family martini shaker.

Like most producers, Mr. Fields has a certain ambivalence toward scripts. He values them as the coin of the realm — “the chips you need if you want to sit at the table in this town are screenplays,” as he put it.

But he also knows that most scripts are not yet movies for a reason. Some are based on books or other material to which rights have expired. Others carry a huge price tag inflated from years of development at one studio or another. Many, perhaps most, “are not very good,” he said.

Still, on hearing about Disney’s sale of Miramax to buyers who were primarily interested in its film library, he was curious about unproduced screenplays that were presumably part of the deal. A friend who had considered investing said there were 642 such scripts and that they were valued in the transaction at exactly nothing.

By 2011, Mr. Fields had talked his way into an agreement entitling him to mine the Miramax scripts, assuming he could find them.

Soon, the boxes, all of them, were headed west, on 18 tractor-trailers, to a more convenient warehouse in the San Fernando Valley. With five interns, Mr. Fields hunted for screenplays and their supporting documents. Of the 642, he reckons that about 110 truly belonged to Miramax, once expired options and other ownership issues were cleared away.

Of those, 10 made the first cut of likely prospects. One was called “The Golden Tux.”

It was an original screenplay, by Jeremy Garelick and Jay Lavender, who had gotten to know each other while working as assistants at the Creative Artists Agency in 1998. Mr. Garelick had proposed a concept to Mr. Lavender: “What if there was a professional best man?”

Mr. Lavender loved it. From that premise, they wrote “The Golden Tux,” which was purchased in 2002 by Miramax’s Dimension unit, with an eye toward Vince Vaughn as the lead. But Mr. Vaughn instead did “Wedding Crashers” in 2005, and later “The Break-Up,” which Mr. Lavender and Mr. Garelick wrote.

“The Golden Tux,” Mr. Fields said, eventually disappeared “into the black hole of that purgatory,” the boxes full of broken Miramax scripts.

Mr. Garelick didn’t quite give up, he said in a phone interview: “I never think anything is dead.” 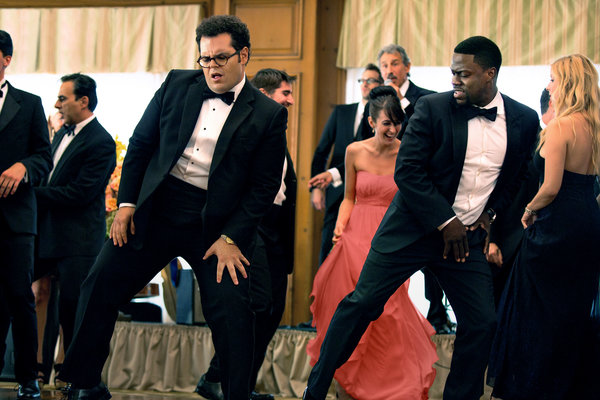 Neither does Mr. Fields. By now in league with the new Miramax owners, an investor group that includes Colony Capital and others, he fished out the script and did what producers do: dangled it, in this case over lunch before his own former assistant, Scott Strauss, who had become an executive vice president at Screen Gems under its president, Clint Culpepper. Mr. Strauss — who knew the screenplay as a writing sample (a script circulated to studios to acquaint them with writers’ skills and sensibility) — bit. Sort of.

In truth, Screen Gems didn’t chomp down until Mr. Culpepper, one of Hollywood’s wilier executives, took the unconventional step of paying Mr. Garelick to revise the script — to pump up the “bromance” — even though Miramax owned it. Mr. Fields yelped at Mr. Culpepper’s audacity in developing a script without bothering to buy it. “I shouldn’t have told you,” Mr. Culpepper remembers saying.

“Everybody in town had read it,” Mr. Culpepper added in a recent phone interview. “I think the reason they didn’t make it was because it didn’t have that heart.”

“The Wedding Ringer,” as the story was retitled, now finds Jimmy Callahan, best man for hire, played by Mr. Hart, facing his ultimate professional challenge, faking the entire groom’s side of a wedding party for an utterly friendless husband-to-be, played by Mr. Gad. It echoes “I Love You, Man” — in that one, a friendless Paul Rudd recruits a guy’s guy, Jason Segel, as his best man.

And there’s a whole lot of “The Hangover,” whose director, Todd Phillips, has been a mentor to Mr. Garelick, who directed “The Wedding Ringer,” his first film.

As for Miramax, the company has its logo on the new movie and is finally getting cash flow from scripts once thought dead. Another of Mr. Fields’s finds, “The 9th Life of Louis Drax,” is being directed by Alexandre Aja as an indie, while a third, written by Stephen Colbert and titled “The Alibi,” has been picked up by HBO’s “Project Greenlight,” the old reality competition that is being revived for 2015.

Earlier this year, the Weinstein brothers themselves managed to tap their old trove, with an agreement that allows them to develop dormant projects like a projected sequel to “Shakespeare in Love.”

As for Mr. Fields, he is seasoned enough to be surprised that his venture actually paid off.

“Everyone has a Hollywood story,” he said. “And most have unhappy endings.”

Check more : Dresses Online Canada
Posted by Cadresses.ca at 12:43 AM