Brittany Stevenson and Jeffrey Callaghan met in 2008, while living in Montreal. They became lovebirds and sealed the deal with a May 19, 2013, wedding, highlighting both the old charm of Toronto and its downtown scene. With a ceremony in the Casa Loma castle and a reception in the Drake Hotel, the pair celebrated their affection for one another and the things that make their hearts swell, like the scents of flowers, good food, and special memories.

The couple wanted to get married in a light-filled venue, so it was fate that the conservatory of Casa Loma, a majestic old home in Toronto, was available for their Sunday morning nuptials.

Brittany carried a bouquet of ranunculus, peonies, and succulents.


Jeffrey designed Brittany’s timeless engagement ring. The six-prong setting is inspired by a honeycomb’s hexagonal shape and his nickname for his sweetheart;  he calls her “Bee.” As for its box? It’s an antique, with a velvet interior, from the 1800s.

With elaborate plasterwork, marble floors, and an Italian stained-glass dome, the conservatory didn’t need much except for flowers. Todd Kjargaard of Jackie O enhanced the space with potted lavender (the bride’s favorite scent and a reminder of the lavender field in which Jeffrey proposed) along the aisle, and an arch of branches and blooming cotton.

Chairs were set up in a semicircular pattern to give the room a cozy feel.


Like the rest of the stationery, the programs were designed by Aprile Elcich. This trifold piece introduced the bridal party with illustrations of each person. 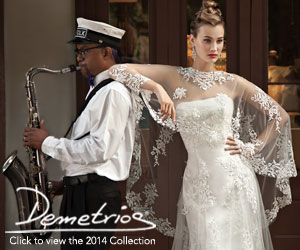