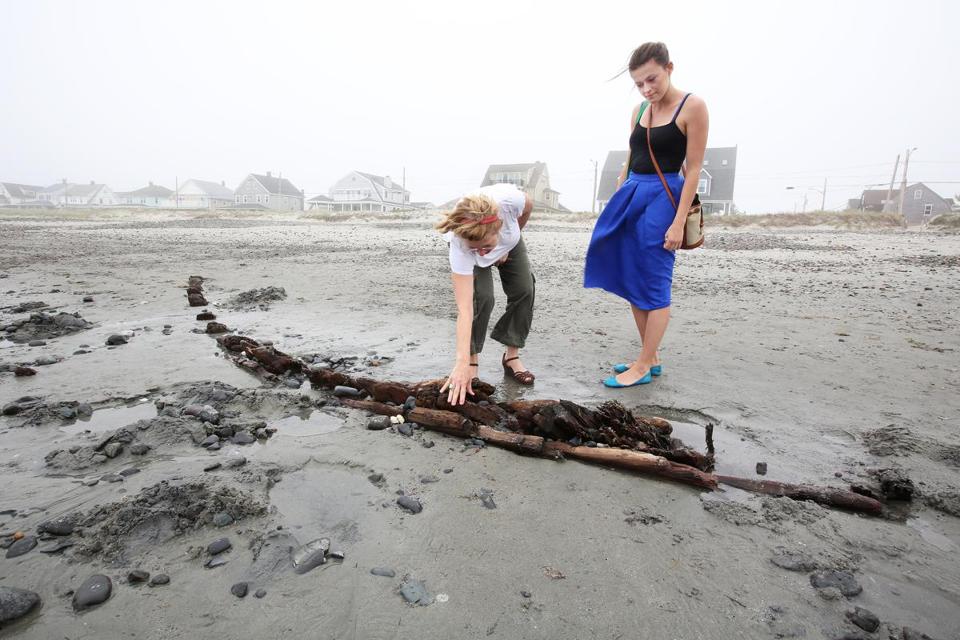 When Victor Mastone got a call last week informing him that the ribs of a ship were protruding through the sand on a Hull beach, he dropped everything and made for the harborside town.

As the state director of underwater archeological resources, Mastone says those are the calls he dreams about.


“The lesson I have learned — and it took me many years to learn — is as soon as you get the call, get out there. Because chances are if you don’t, the wreckage will get covered up,” he said.

Mastone believes the latest discovery, found by a beachgoer while the tide was out at Nantasket Beach last week, is the remains of a wooden cargo ship used to carry supplies like timber in the late 1800s.


“These were the buses, box trucks, and 18-wheelers of the 19th century and even earlier. During that time it was cheaper for them to move things by boat,” Mastone said.


He reached his preliminary conclusion based on the materials used to build the boat, and the way the ship was constructed using wood fasteners.

Mastone said the ship is most likely a two- to three-masted schooner that is 100 feet long and 30 feet wide. The stern of the boat is pushing through the sand.


Mastone said there are quite a few wrecks like this off Hull, but it’s rare that a visitor would be able to see them on land.

The natural shift of the ocean’s current pulled just the right way to create a sandbar that uncovered the artifact. The intense winter storms also played a role in removing sand from the beach and revealing the remnants, officials said.


“This site provides the public — especially the nondiving community — with an opportunity to experience a real shipwreck,” Mastone said. “This is a rare experience.”


The Hull Lifesaving Museum, which has been working closely with Mastone on the find, will act as the state’s agent and assist in investigating the ship’s history.

Peter Wild, the museum’s executive director, said he is assembling a team of volunteers to help excavate the ship as best they can to get a better look at the wreckage and positively identify it.


“So far we did enough digging to confirm that it’s an old wreck,” Wild said. “We’ll do one big dig between tides this week.”

Once it’s uncovered, experts will photograph the remains and examine its components.

“This is absolutely fascinating and a new piece of information, and we don’t get pieces of information like this often,” Wild said.

State officials are encouraging curious onlookers to stop by the beach at low tide to take in the site, but are warning them not to touch the ship’s wooden fragments.

Mastone said it would be illegal for a member of the public to take anything from the ship. Both Hull police and the Massachusetts Environmental Police are keeping watch.

Mastone said the boat could be buried by summer’s end, so people interested in examining the artifact should visit soon.

“The site . . . provides a connection with our maritime past; our collective maritime heritage. At even the most basic level, people tend to forget the strong connection between man and the sea,” he said.

Read more : beach wedding dresses at Canada
Posted by Cadresses.ca at 3:32 AM